The most meaningful classic dignity is the domicile. Here the characteristics of planet and zodiac sign are most similar. If one compares the description of a sign and its ruler in astrological literature, it goes unanimously confirmed. The order of the domiciles' planets is also harmonic represented by the order of the planets by distance to the sun (Sun - Mercury - Venus - Mars - Jupiter - Saturn) and the order of the planets by speed of movement (Moon - Mercury - Venus - Mars - Jupiter - Saturn). In the first case, the moon can't be logically integrated, and in the second case, the sun can't be logically integrated. Thus, the order of the classic domicile-exile system is – as Johannes Kepler realized – only nearly complete.

The newly discovered planets Uranus and Neptune and the dwarf planet Pluto have quickly shown their relation to zodiac signs. The similarity between Uranus and Aquarius, Neptune and Pisces, and Pluto and Scorpio is obvious. However, a harmonic domicile order is almost entirely ruined by that. What remains is a system – if you can still call it a system – with many question marks.

Do the domiciles create a system without lawfulness and with random associations?
-  Three signs now have two rulers. What about the other nine signs?
-  How do two planets share their rulership of a sign?
-  When two planets share the rulership of a sign, is one of them more similar in means of characteristics?
-  If so, which one?
-  Does each sign have but one ruler and the classic needs to fade?
-  Why are there twelve signs but just ten rulers?

If we again compare the usual description of planets and Zodiac signs, it becomes clear: Saturn corresponds more to Capricorn as to Aquarius, Jupiter more to Sagittarius than Pisces and Mars more to Aries as to Scorpio. One already knew this before the discovery of Uranus. Uranus corresponds to Aquarius, Neptune to Pisces, Pluto to Scorpio, the sun to Leo and the moon to Cancer. Mercury corresponds more to Gemini as to the Virgo and Venus more to Libra than to Taurus (chapter 2.2.2.2). The classical allocation from parts of the body to planets and signs clarifies the correctness of this assessment. Without rulers the Zodiac signs are Taurus and Virgo. Here the most feasible rule is of two unknown planets. Thus we have in the astrology two Higgs particles (chapter 2.2.2).

Up to the discovery of Uranus nobody thought there were undiscovered planets. Since then that has changed. The astronomers had also not completely given up the idea of searching for unknown planets in our solar system. Planet X, the presumed ruler of Taurus, I provisionally call Faunus. The nature of Faunus approximates the nature of Taurus greatly (chapter 1.13). Planet Y, the ruler of Virgo, I provisionally call Iustitia. The nature of Iustitia approximates the nature of Virgo greatly (chapter 1.14). With the help of these two hypothetical astrological Higgs particles, we finally have a perfectly harmonious domicile allocation sequence. This series (Orbit size: Moon - Mercury - Venus - Mars - Jupiter - Saturn - Uranus - Neptune - Pluto - Faunus - Iustitia - Sun) presupposes that the planets X and Y are outside of Pluto's course (chapter 2.2.2.1). The series begins at the moon, which has the smallest orbit, and winds up through the active signs to Saturn. From Uranus it descends through the passive signs down to the sun with the greatest orbit.

Therefore, every planet has the biggest similarities with the sign of its domicile. One already knew seven allocations (Mars-Aries, Mercury-Gemini, Moon-Cancer, Sun-Leo, Venus-Libra, Jupiter- Sagittarius, Saturn-Capricorn) in the classical astrology. Three allocations (Uranus-Aquarius, Neptune-Pisces, Pluto-Scorpio) are only well-known in modern astrology. And two allocations (Faunus-Taurus, Iustitia-Virgo) are new. In the countersigns one can find the 1st exile.

This symmetrical arrangement crystallized 1974, in the first year of my research in this realm. 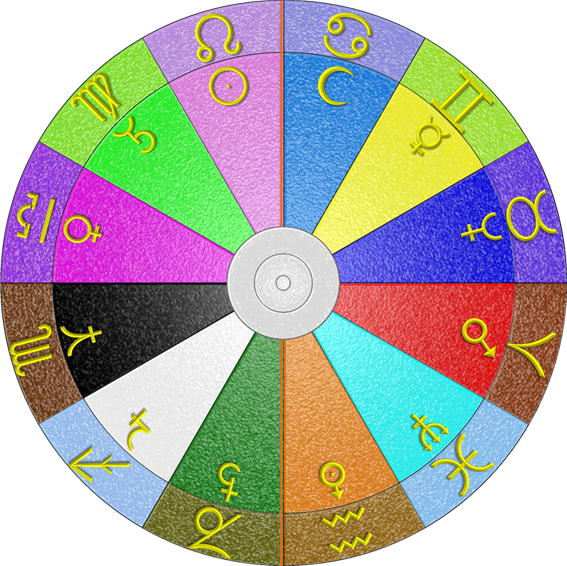 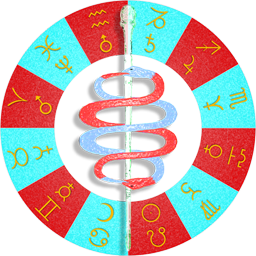